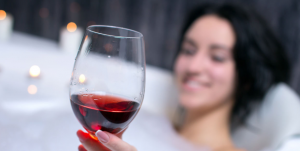 So you’re drinking wine alone. There are a couple of reasons this could be happening. First, you could have had a crap day. This happens to the best of us. You’ve been at work all day, maybe your shift got extended past what you thought you would be working because the restaurant or store or whatever was extra busy. So not only were you there longer than you wanted to be, but you had to deal with more people that you had expected. And then maybe your stump grinding service guys were late. Always a nightmare. Or maybe there was a deal you were supposed to have closed at the office, but it fell through (I don’t know how any of that would work, because I have obviously never had a real job in which I have had to close any deals … I don’t even know if that’s a thing that people say).

Anyway, whatever, you’ve had a rough day at work. You come home, take off your shoes (they’ve probably been pinching your toes from the moment you put them on this morning, because that’s just the kind of day you’ve had), and head straight to the wine bottle you have on the counter (or in the fridge, if it’s white; you may be exhausted, but you’re not a heathen). You wonder whether you should change into your jams before you drink the wine, or whether you should dive right in and pour yourself a glass. You decide on the best of both worlds, and pop open the bottle of wine, don’t even bother with the glass, just chug it on your way to the bedroom.

So you’re in your bedroom with your bottle of (probably super cheap) wine, and you just drop your clothes wherever you happen to be when you climb out of them, and then you pull on the comfiest clothes that you own. If you’re in Canada, that’s likely a pair of Roots sweatpants, and on top, for me, at least, a men’s band t-shirt. My favourite at the moment is my boyfriend’s Stars t-shirt; it’s so comfy, and so perfect for lounging around and pounding back that vino.

The net place I’m headed is my couch. Depending on what I decide to do, I might have a book, might have my computer, might have the remote. Great thing is, I can imagine myself drinking wine doing any of those things. Curled under some blankets with a good book? Glass (or bottle) of wine in hand is totally legit. Cruising though some stupid Buzzfeed articles? Big ol’ glass of red on the table beside your couch. Binge-watching a show you may have already watched? Awesome, that calls for a bag of something terrible for you and a whole bottle of the good stuff.

You can even have wine in the bathtub! Who’s stopping you? That’s the beauty of wine! Anything relaxing you can think of, you can imagine yourself pairing the activity with a delicious helping of the sweet, sweet alcoholic grape juice. It’s the cure for a day in the life of any typical human. It’s what brings us all together. Praise be to wine.