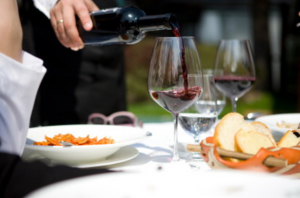 Ah, the dilemma of the restaurant wine. I will only get wine at a restaurant if I am there with my boyfriend, and it’s a pretty special occasion. I’m talking birthday, anniversary, something along those lines. And even then, we don’t always indulge. The thing about the restaurant wine is that you know that you can get wine that’s probably just as good at the LCBO or some other friendly neighbourhood liquor store for cheaper. And that is something that I think about before I order a bottle (or a glass, but I’ll get to that later), but I also think well, realistically, I could make this pasta dish for like three dollars at home, and yet here I am spending twelve …. it’s not like I’m paying for metal roofing contractors Fayetteville NC to jazz up my roof which I definitely couldn’t render myself. Basically, what I’m saying is that when you go to a restaurant, you just kind of have to accept that you’re paying for the experience and the service, not just the food and libations.

So, assuming we’ve decided to get some wine, because it’s a special day and we deserve it, now we have the dilemma of bottle vs glass. Usually for us, we get a bottle, because it usually (if not always) makes more sense economically than getting two glasses. That said, this means that my boyfriend will end up drinking quite a bit of wine, because I’m a bit of a lightweight. And we have the same conversation every time we get wine. He says that I’m going to have to help him out, that he really doesn’t want to have to drink three quarters of the bottle because I get tipsy after a glass, and I promise that he won’t and, more often than not, as you’ve probably already guessed, I do get tipsy after a glass, and he ends up having to drink way more wine than he wanted.

Reading that, you might think why don’t you just get the glasses, then? and you know what, you’re probably right; might not be as economically sound, but at least he wouldn’t be forced to drain back three glasses by himself. Sure, might make more sense, but we’ll never do that. See, he’s Dutch and I’m Scottish, so it’s just not in our blood to not take the best deal possible, even if it makes one of us physically uncomfortable. I know, it’s a little sad, but it’s just the way that we’re wired.

Another benefit of getting individual glasses is that you don’t have to compromise on which wine you get. Luckily, my boyfriend is very accommodating, so we can pretty much always get what I want, which will pretty much always be white. But I know that not everyone is so lucky, and that some people are going to want a different kind of wine than their partner. Hence, the glass option. I guess it’s all about priorities. If you’re having steak, and your partner’s having fish, but you want to save money by getting a bottle … what’s to be done? Do you send the extra few bucks and each get a glass of the appropriate wine pairing, or do you save the money and have white wine with your steak? First world problems.